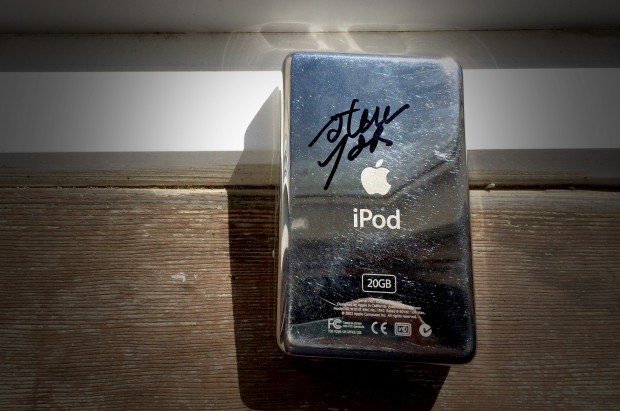 Steve Jobs and the Trampoline

I am re-re-publishing this story on the 2-year anniversary of his death (with a few never-before released photos) in hopes of preserving a moment in time—about a simple trampoline installation just a few short days before Steve returned to work from his first ‘public’ surgery; and how I got to meet him in person… in his backyard. For all typical media accounts, Steve Jobs was a fierce competitor and ruthless innovator. There is talk of his reality distortion field and a strong-willed motivation to get his way. But what I found was a passionate, kind, family man (which, given the circumstances, makes total sense) and I will remain forever affected by this meeting and the products that he helped shape.

It was as simple as “Hello, I’m Steve… nice to meet you. Come on into the house.” And with that, we walked through his front gate into the garage and around to the backyard.

I can say that going into it, I was strangely nervous. I guess, it’s not every day that you get to meet one of the most famous icons in the modern computer business… especially at his house, as he is finishing his breakfast.

Steve lives in a nice, big expensive house in Palo Alto—but it is a different kind of nice then what you would expect—more “Buddhist temple” than “Trump mansion”. Really close to the type of house that I would love to live in, had I enough money to spend. 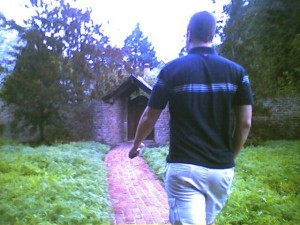 Approaching the house, you walk through a front yard filled with fruit trees; past an opening in the exterior 6-foot wall running around the property; into an open front yard which splits into the left to go up to the main house and straight back through an antique double-sized garage; to the very large backyard (so big in fact, it looks like he knocked down a neighboring house and is using the empty lot for his yard). This is a rather large space—especially for this part of peninsula—filled with flowers, vegetables, fruit trees, and rose bushes. The garden is naturally landscaped (yet orderly) with nice pathways and benches everywhere. The centerpiece of the garden is a large teepee-shaped trellis. Quite an understated elegance. 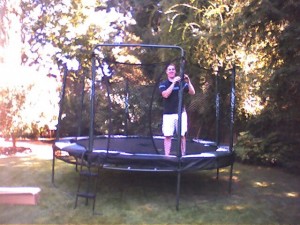 We set up in the back corner of the yard and began the install, which took us 3 hours to complete. I will spare you most of the boring details of the day… assembling frame rails, padding safety enclosures, structures and netting. During the process, he would come out and check on us every 45 minutes or so—usually staying for a bit to chat about the trampoline construction, the company that built it, the manufacturing processes, or how the trampoline could be simplified and improved upon. We didn’t really find any opportunities to chat about things outside the task at hand but it was nice that he would spend any time at all with us. He even got up to test-jump a bit too (I really, really wish I had that on video).

Before we finished the install, his young daughter discovers the present we had been building and comes outside to investigate. She was having a party of some sort with all her friends, and was very excited to have a start jumping! We complete the install, and move to a nearby bench so that the girls could use their new toy; watching the girls play a bit as we hung around, waiting for Steve to finish a conversation in his front yard.

He soon finishes talking and comes around back, Rob explains a little about the safety rules and the specifics of the install. Steve jumps up inside the trampoline again, this time with his daughter. Such a sweet moment. He bounces around inside a bit more, then gets out with some encouraging words to her and her friends. Then he paid us the install fee (plus the largest tip Rob has ever received on an install).

“And one more thing…” we sheepishly ask, trying desperately to muster the courage.

(Cut to us lightning-quickly whipping out our personal music players—Rob’s new 4g model, and my beat-up old 2g brick from 2002—with a black Sharpie pen)

He looks at mine and continues, “…and that one is going to be a collectors item soon!”

(I am shaking with excitement.) 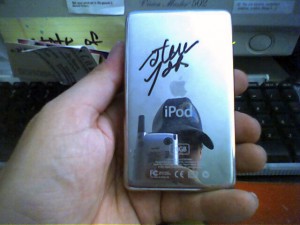 Then he asks us some questions about how many of our friends have iPods and if we use iTunes Music Store and we answer honestly. I mention that I am waiting to get a new iPod with a larger hard drive along with a few more leading questions in the hopes that he will reveal any information on the rumored next model—and for a moment he pauses as if actually considering handing us a nugget of truth; but doesn’t let end up letting any secret cats, out of any well-designed Apple bags.

And then, well, we walked ourselves out to the curb! Richer with cash, richer with experience, and richer with souvenirs of the experience—brainstorming ways to preserve the signature for a lifetime.

Republished from a few forgotten blogs and various places on the internet, and re-edited for continuity.