Soul by the Pound: In Conversation with Michael Fakesch | Exkclamation Magazine
Interviews, Music 0

Soul by the Pound: In Conversation with Michael Fakesch

From 1995–2007 Michael Fakesch made music as half of Funkstörung (an early pioneering IDM band). Fusing music genres was always a key ingredient for him, especially with their remixes of Björk and Wu-Tang Clan; and he fostered outstanding collaborations with visual artists (e.g. The Designers Republic, Zeitguised) gaining him a worldwide following for most of his career.

Ever the audio pioneer, in 2008 he released a beautiful, retro-futuristic funk record “Dos” paving the way for a worldwide revival and celebration of electronic funk tracks. And we got a chance to sit down with him to discuss that record.

What do you call your style of music?
Hmmm… high tech funk? I don’t know… isn’t it up to you journalists to invent names for music styles? 😉

HA! …maybe, but I wanted to get it straight from the source. Speaking of sources—when I first heard your new material, I immediately thought of Early Prince and 80’s funk, yet there are clearly modern influences (Timberlake/D’Angelo?), and even some references to your work with Funkstörung. Was any of this running though your mind while creating “DOS”?

The main concept for “DOS” was doing a rough funk record with loads of electronics in it.

I actually just wanted to try out new things…didn’t want to do another Funkstörung-like record. For me it’s important not to repeat myself! The main concept for “DOS” was doing a rough funk record with loads of electronics in it. Initially I wanted the album to have a few instrumentals, a few vocal tracks with different singers, and even a few hip-hop songs (I recorded two songs with High Priest from Anti Pop Consortium); but then the songs with Taprikk came out so great, I decided to do the whole album with him and throw all other ideas overboard.

Given the chance, who would you love to tour with?
Anyone we get along well with, it’s much more important touring with nice people than having a famous pop star to support. Ok, ok, you want names: Jamie Lidell, Cristian Vogel, Chromeo, Hey Willpower, Kid Acne, Depth Charge, and Emperor Machine.

And are you planning on touring the US?
Not yet, but we will see…

How much does fashion design play a part of your stage performances?
Fashion doesn’t play any role, we are not George Clinton in the early 80’s ;-)… I know fashion and funk belong together somehow, but we think that’s a concept not fitting to “DOS”’.

Does your personal style provide any influence?
Clothes or the way I talk doesn’t influence my music, but of course the way I think has some effect on music. I think a lot, so my music is very detailed, but I am also quite balanced (I love doing mad music, but I am also a family guy), so you will always find a balance in my songs (maybe: cold detailed electronics vs. beautiful melodies or soulful voices). 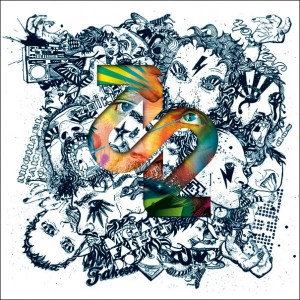 I do notice a lot of very progressive design styles in all the projects you participate in. How does design play a part of your music-making process? Do you have any artists work in mind while conceptualizing the album?
Design has always been very important for me. I can’t understand other musicians putting loads of time and effort into producing their songs, but not taking any care of a good design. I think good artwork is really important, even in the times of downloading mp3’s. On “DOS” my friend, Sebastian Onufszak (In Graphics We Trust), started designing the sleeve at almost the same moment we started producing the album, so he developed the artwork in parallel to the music. By the way, we are almost finished with our DVD ‘videos’ featuring videos for all the album tracks…

It seems that almost all of your songs could translate to other genres, are you planning any club remixes, or alternate versions?
I am not really planning any alternative versions, but I am open for anything. Yeah, you are right; most of the songs could work as acoustic versions, rock versions, techno versions, or whatever, “DOS” has many influences, so you could definitely interpret the songs from different views.

Since you live in Germany, do you also have German-language versions of your songs?
Ha-ha… no, German sounds awful I think ;-)… although it would be funny.

It’s not that bad… could be an interesting challenge too.Who influences you the most?
My wife and my kid 😉 Musically, I am really inspired by Taprikk Sweezee… honestly! I also like DC Recordings, Lex, Big Dada, Warp, Old Plug Research, Hefty, Ghostly,…even a few Timbaland productions or Neptunes. I know Taprikk is really into Marvin Gaye, Stevie Wonder, very old Prince stuff, Ed Banger and even hardcore, as his first bands were hardcore. Anyway, there is too much good stuff out there.

True. It’s easy to go bankrupt keeping up with all the good records out there. Do you spend a lot of time shopping for music? And where do you buy most if it from?
I get a lot of promos, but all the rest I buy as mp3’s from Bleep.com

Who do you hope will pick up your album? Who is your ultimate fan?
Anyone… I like loads of different music styles, so I hope our fans do too.