The beautiful mystery unfolds as Jon Hopkins and Megan James of Purity Ring sound out in this reworked version of “Breathe This Air” (from this year’s Immunity release). A gorgeously shot video directed by Anthony Dickenson that examines a fleeting moment-in-time and the connections between three unlikely characters. (Please note: the video features brief nudity.) 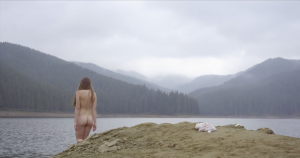 “I was interested in those times when you think you’re totally alone in your thoughts and something unexpectedly disrupts that, snapping you out. The characters in the film have very different stories but I wanted to create distinct parallels, bringing them closer and closer until they actually intersect in a single defining moment.”

“Breathe This Air” is out now as a single, alongside Hopkins’ remix of Purity Ring’s ‘Amenamy’. Immunity was nominated for this year’s Mercury Prize. Make sure you check out our review of the full album.